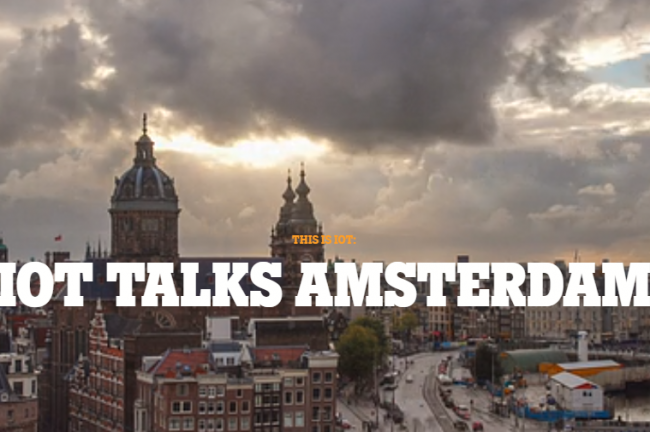 MachNation attended the 12th IoT Talks event, sponsored by Tele2 in Amsterdam on 28 September 2017. The event brought together 500 customers and partners of Tele2 to discuss current IoT deployments, muse on future IoT developments and provide ample opportunity for networking. MachNation participated on a panel to discuss trends in IoT, future developments and some of the inhibitors to IoT technology adoption.

In 2013, MachNation attended the 1st IoT Talks event and was delighted to attend the 12th event located in Westergasfabriek, a renovated space formerly a factory for the production of natural gas. The event has grown into a gathering of connected, bright, insightful people.

One of the best presentations was from Arjan Bovenberg, Head of Product Management at Tele2. Arjan and two members of his team Anders Wittfeldt, Lead Engineer and Ulf Wirén-Hallqvist, UX Designer described and demonstrated the new Tele2 IoT SD-WAN product called 2Route. 2Route automates the creation of secured connectivity for IoT machine data. With a few clicks, an enterprise can create a secure connection for IoT data from the SIM in the field to an AWS IoT cloud to an end-user’s PCs. And in fact, 2Route can be used to secure any IP data — including traffic from other carriers’ IoT SIMs — from device to cloud to PC. While almost all carriers can create this type of secure IoT machine data connectivity for their customers, the process is fairly manual and can take weeks to complete. With 2Route, customers can do it themselves in a matter of a few minutes or hours. Tele2 is focused on bringing a unified IoT connectivity portfolio to its customers with fully automated tools.

In the afternoon, we saw a variety of working IoT demos from companies including IBM, Sim Services, Axians, ICT Group, Advantech, Cisco Jasper and Telit. These enterprises brought assets including large pieces of industrial equipment, automobiles and restaurant equipment to show how IoT is creating new opportunities and driving process improvements across verticals.

Next year, we expect Tele2 will continue to attract more enterprises to IoT Talks to demonstrate their IoT solutions and engage with each other.