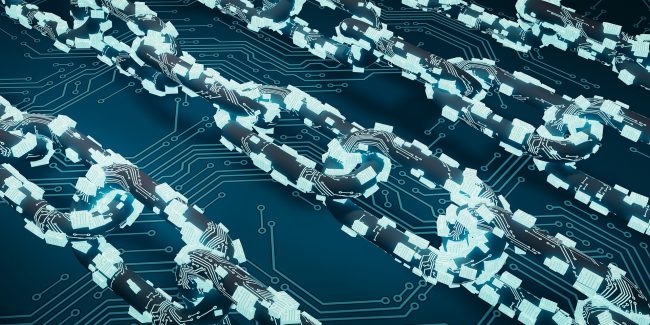 Companies are beginning to explore the benefits of using blockchain technology to address their growing IoT needs. Blockchain is a cryptographically secured, distributed ledger that allows for the secure transfer of information between parties. The primary benefit for adding blockchain to an IoT deployment is the decentralized architecture of distributed ledger technologies like blockchain. Operating on a peer-to-peer (P2P) network, rather than a centralized cloud environment allows for the distribution of computer power and sensitive information across users. This is an ideal framework for handling the vast amounts of data IoT networks are set to produce as the industry continues to expand.

There are several blockchain-centric platforms to address the challenges of IoT. We discuss 3 of these platforms below, although there are more available in the market.

IOTA’s Tangle platform is specifically designed to work with IoT networks. The Tangle platform was developed to provide a decentralized financial transaction and data transfer layer for connected IoT devices.

Tangle is unique from other blockchain platforms in two ways.

Tangle’s validation process has particular application in the financial sector. For example, Den Norske Bank is currently pursuing an exploratory partnership with IOTA to see how it can use Tangle to improve its existing financial services.

Slock.it’s Incubed suite connects IoT cloud devices to the blockchain with a focus on security and access controls. Incubed creates a digital twin for all connected devices that acts as a smart contract. Smart contracts allow each device to define the rules and conditions that must be met to accept messages from other devices.

Smart contracts enable machine-to-machine (M2M) communication to be carried out more efficiently and securely by predefining the conditions under which a transaction of data occurs. This reduces the transmission of irrelevant data and acts as a firewall against malware. Applications include personal cell phones, autonomous cars, and connected devices in an industrial IoT (IIoT) supply chain.

BlockMesh provides physical hardware and software applications to connect devices to a mesh network. A mesh network is a group of connected devices that passes along information until the intended recipient is reached. BlockMesh’s software passes data through devices without the need for cellular data networks by using the device’s built-in communication protocols to create a P2P exchange. Devices without WIFI access will push data to other devices (nodes) on the network via a bluetooth exchange, and will continue to pass through connected nodes within range until a device with network access is reached, thus completing the transaction. This is especially useful as a means of communication in developing countries without established cellular towers. BlockMesh offers MeshEx custom WIFI routers to increase hotspot range and spread the network. In areas with already established telecom providers, the widespread adoption of a mesh network has the potential to drive cellular data demand, and prices, lower.

BlockMesh wallet uses blockchain technology to reward users who support the platform by essentially paying them in the form of Mesh Tokens (MESH). Users on the network receive Mesh Tokens for every megabyte of data that passes through their device. Mesh Tokens are a transferable cryptocurrency that can be used to pay for services where accepted, or redeemed for their worth in traditional currency. As the number of IoT devices continues to grow, technology like BlockMesh has the potential to offer an alternative means of communication from crowded cellular networks.

In this article, we have discussed a small number of blockchain IoT platforms. The list of new platforms continues to grow as the industry evolves. Other notable projects include Hdac, IoTeX, Streamr, Helium, and Power Ledger.

With billions of newly connected devices set to come online in the next year, IoT platforms are sure to face issues scaling. While blockchain technology is not a complete solution to overcoming the challenges of large-scale IoT deployments, it is seen by many as the first step in a new evolution for IoT.